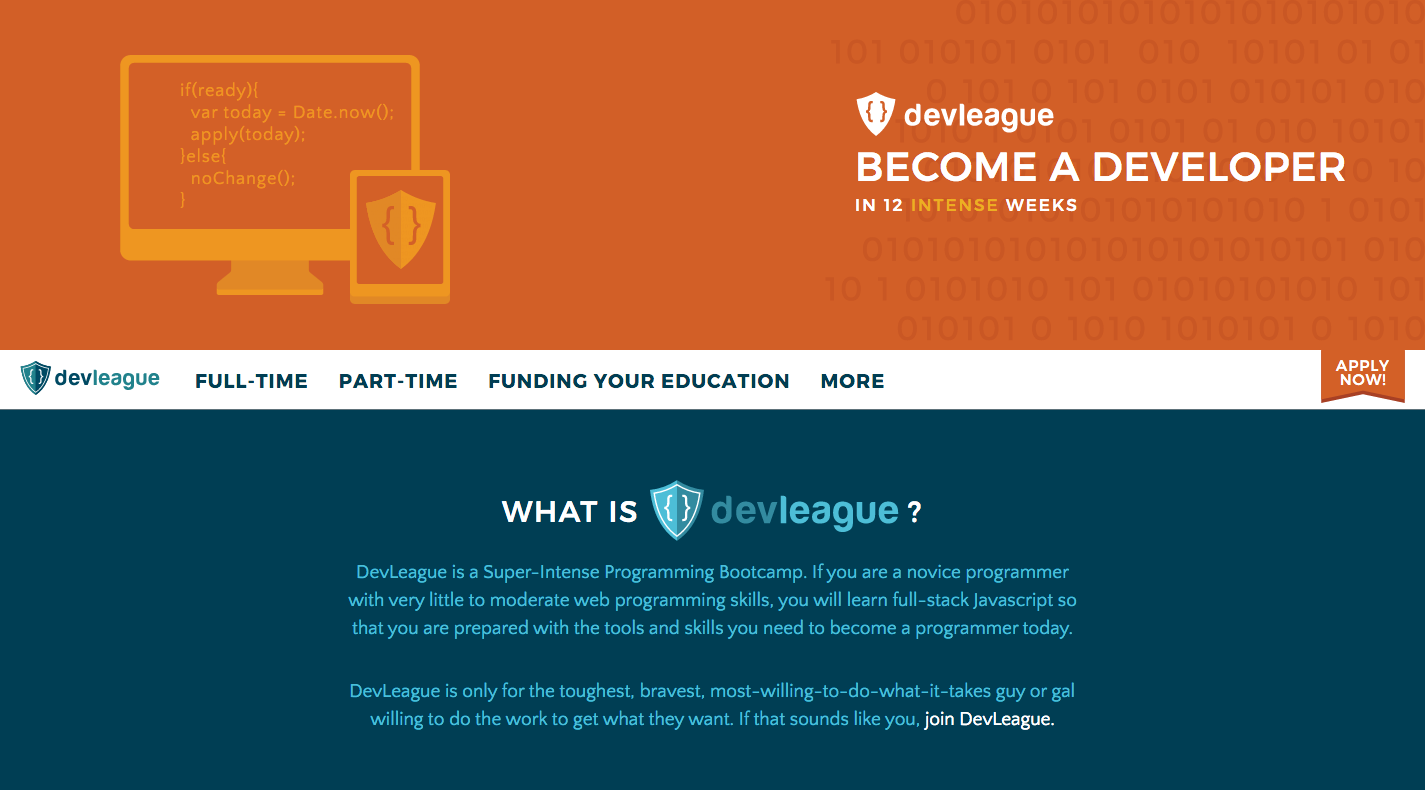 My Experience With DevLeague 🔗︎

This is where I’ll go through how my admissions process was with DevLeague, the 1st JavaScript focused coding bootcamp in Hawaii.

I’ll be doing this kind of entry with every bootcamp I’ve applied to and be critiquing on positives and negatives along the way. I think it’s important that people have an honest look at each bootcamp.

That being said, I’m not releasing anything here without DevLeague’s permission.

I decided to apply to DevLeague since they were the first of their kind in Hawaii. I have some connection with Hawaii. I’ve actually never been, but I was initially going to attend Hawaii Pacific University as a double major in Computer Science and Integrated Multimedia with a very large scholarship. Since I had enough credits from high school, I’d still be able to graduate in 4 years. I even had a party a few months before school started because I was certain at that point I was going to attend HPU. It was a win-win situation, but then out of the blue, in July, I got accepted to Jacobs University with a medium-sized scholarship and decided to go there for the 3-year CS program.

I don’t regret my decision, but since then, I’ve always had the desire to get to know Hawaii but obviously had no chance for financial reasons. DevLeague would be a practical way to do this. I’m also considering going to UH at Manoa for my grad studies in CS so there’s that too.

Jason was a great interviewer! All around chill guy and I was comfortable all throughout the interview. He was really informative as well and told me everything I needed to know about DevLeague in great detail. His friend and co-founder of DevLeague, Russel, who was also with him at the time, was also quite amiable.

answers taken from my interview are paraphrased or just referenced verbatim

I was accepted!!! Apparently, I did a great job on my coding challenge (creating a very basic web app) submission and turned it in well within the timeline. 😁

When I was in the process of applying to a ton of coding bootcamps, I came across DevLeague.

They were kind enough to feature my blog post in January 2015 on my interview experience with them on their own website through their blog. I thought they were some of the nicest people I came across when the coding bootcamp interview process and definitely appreciate how they’re the only coding bootcamp in Hawaii.

Ever wonder what our interview process is like? We have recently started getting many applications from the mainland and one of our recent mainland applicants blogged about her experience. We could...

Thanks to @fvcproductions for smry of applicant experience with us. This young woman is going places! #javascript https://t.co/xCTIQGNS41

I also have shared my interview experience with bootcamps such as