A conference that promotes diversity in computing.

The Tapia conference has always been a premier venue to acknowledge, to promote and to celebrate diversity in computing.

The goal of the Tapia Conferences is to bring together undergraduate and graduate students, faculty, researchers, and professionals in computing from all backgrounds and ethnicities to:

This is more of a telling of a personal journey than a technical description or overview of what the conference entails.

In other words, it's meant to be informal so do not take it too seriously (kind of like everything else in blogging).

So what is that TAPIA Conference? 🔗︎

Basically, the 2015 Richard Tapia Conference is this conference that promotes diversity in computing. It has been ongoing annually since 2001. The guy that the conference is named after is Richard Tapia, who is this Mexican American math professor at Rice who is apparently pretty effective when it comes to promoting diversity outreach in STEM fields.

The goal of the Tapia Conferences is to bring together undergraduate and graduate students, faculty, researchers, and professionals in computing from all backgrounds and ethnicities to:

For pictures of this conference, check out their Facebook Group!

Norfolk from up high is pretty cool looking with all the snow everywhere.

When I get to Philadelphia, my flight to Boston gets delayed… twice. I end up having to book a slightly earlier flight through Customer Service, but the whole delay was a first.

⛄️ When I get to Boston, I get the idea that the Yeti (not the one from Foundation, just THE Yeti) lives there because it was so snowy from the plane.

Once I arrive in Boston, I end up hopping on a shared van that the Texas A&M students were using. I didn't even have to pay for anything because the driver assumed I was with the students. First win.

The best part about the trip to the hotel was that the driver LOOKED and TALKED exactly like the character Gru from Despicable Me. It was AWESOME. It was really hard to stop myself from LOL every time I heard him talk. The massive amounts of snow everywhere was just secondary to the experience of seeing a real-life Gru. Unfortunately, I didn't get a pic of him because that would have been kinda awkward since I was sitting in shotgun.

Once I arrive at the hotel free-riding, I check into the hotel and then register. My lanyard, like with the triple AI conference, has the same organization associated with my name - FVCproductions. How nice.

At this point, I have roughly 3 hours left until the scholarship recipient orientation. My roommate/buddy, [Anisha Carter]{}, who is also from Hampton gets to the hotel soon after and I help her get started. I tell her I won't be able to attend the ‘Welcome Reception & Fireside Chat’ or the ‘Desert & Career Fair’ session because I'll be meeting up with my cousin who lives in Boston.

The first thing I notice about the orientation is that there are a lot of minorities, mostly Hispanics and blacks that are relatively attractive. I'm biased because I'm a heterosexual Latina, but seriously, a lot of people here are young and fresh looking. #tapia2015

My cousin is late so I attend part of the welcoming reception and then end up having to awkwardly leave in the middle of it. Eventually meeting up with my coz though was great since we have so much to catch up on. I'm full half way through our Thai dinner.

Anisha tells me the next day a semi-interesting story about meeting this short Hispanic guy named George who invited her and someone she met at TAPIA out to drink beer while she was exploring the Copley Place. But I guess that's what happens when you take a picture of a pile of snow and reveal you're a tourist to everyone around you. 😏

Tristan is the coolest.

Today really sucked because my plane got delayed 6 hours so when I should have arrived home at 3 pm, I actually arrived around 9 pm. Get ready for an airport horror story.

The first time I got into the plane, we were a few minutes from lifting off when the airport decides it's not safe to fly. We wait for half an hour back in the terminal and then it's finally decided we have to deplane.

Consistently throughout the process, I faced the dilemma of whether or not to take the initiative on finding a different flight or just sayin’ “screw it, let me get some pizza and a smoothie or something to pass the time (which I did do once or twice - I mean, Sbarro's is just irresistible)". I eventually decided to try and get a different flight through customer service.

Half way through waiting in this 1-hour line, I call this help line that this lady from Toronto gives me since the help line only helps with domestic flights. It's officially from US Airways but then the help line goes on to offer me a $100 Walmart gift card and insisting that I give them my personal info to get this card. I'm pretty gullible, so I give them my name and address but then they ask for my debit card # and I go crazy and ask why they haven't help me out yet. I'm still in the ridiculously long line and hang up on the stupid help line and then all of a sudden, US Airways announces that the flight I've been waiting for 4 hours so far now is now boarding.

When I got home, I took all my anger out on the snow which wasn't really a fun process either.

The Tapia Conference really ended up being a grand time. I met some cool people, like Britney and Sean, who I friended on LinkedIn. I even ended up joining 2 organizations, Hispanics in Computing and Afro Movers & Shakers. I'm hoping to help out HIC out because they only have a e-mail listserv right now which isn't very effective in distributing information. I actually ended up recommending Slack to the organizer of Afro Movers & Shakers and he thought it was a cool idea and made one.

With all the swag, flyers, and brochures I received from the conference, Anisha and I were able to decorate the CS department more effectively, kind of like a refurbishing of the entire area. We can also now use the swag we received as a way to offer prizes for any events we have for our ACM Student Chapter. 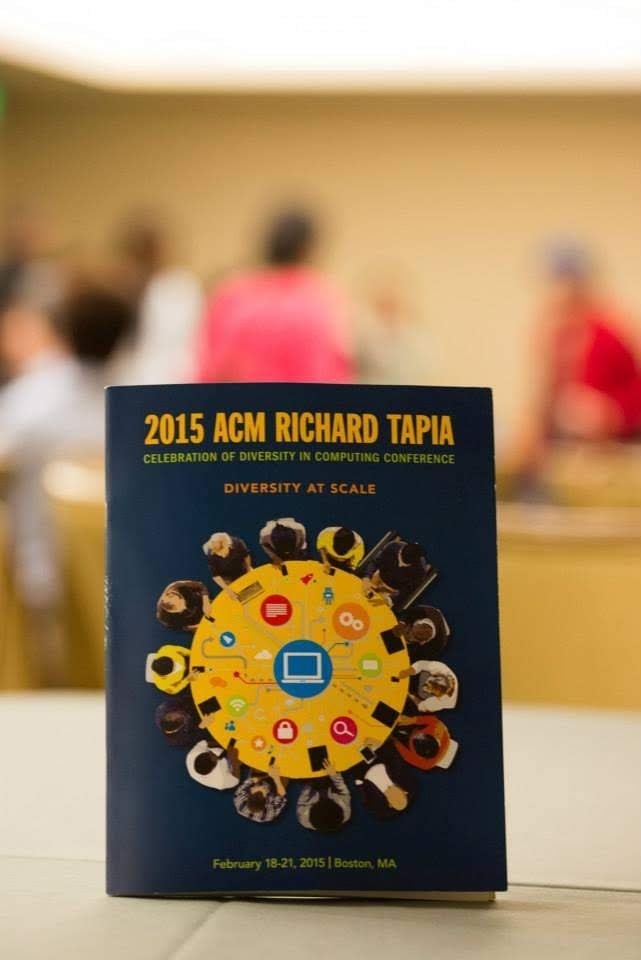 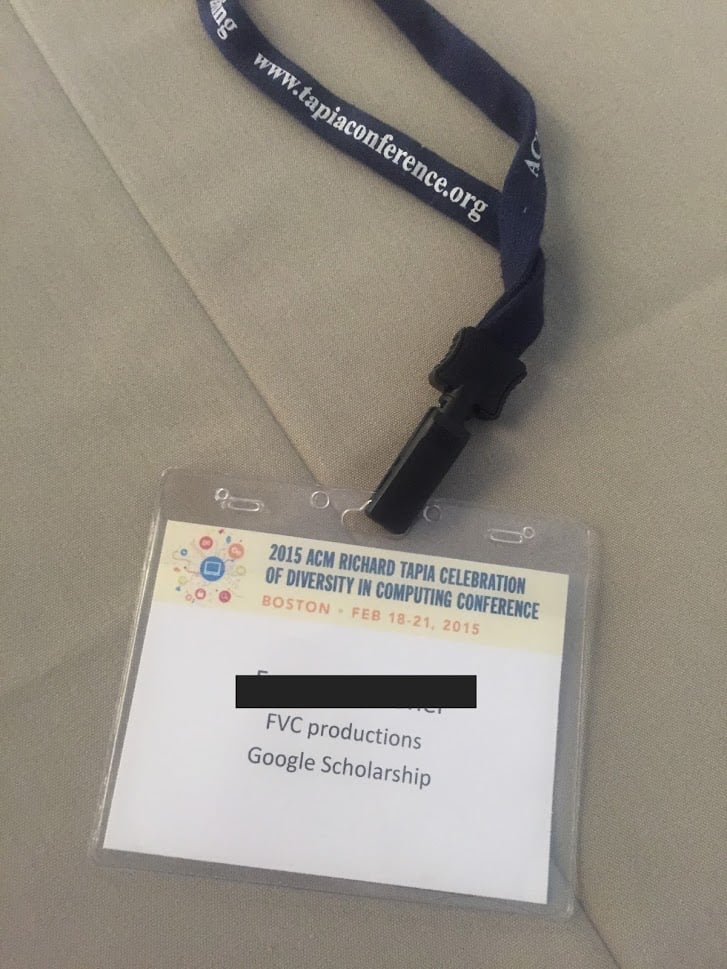 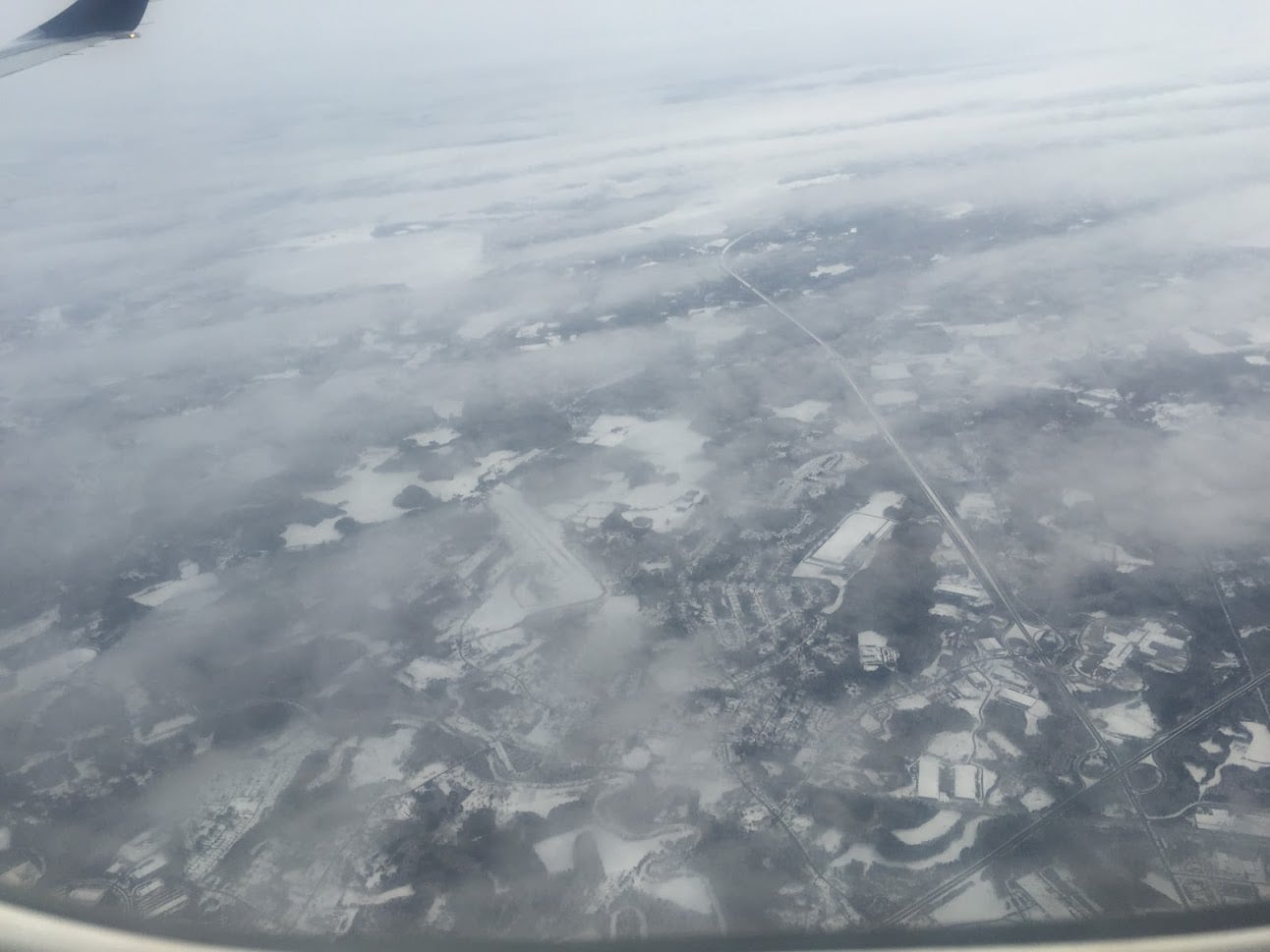 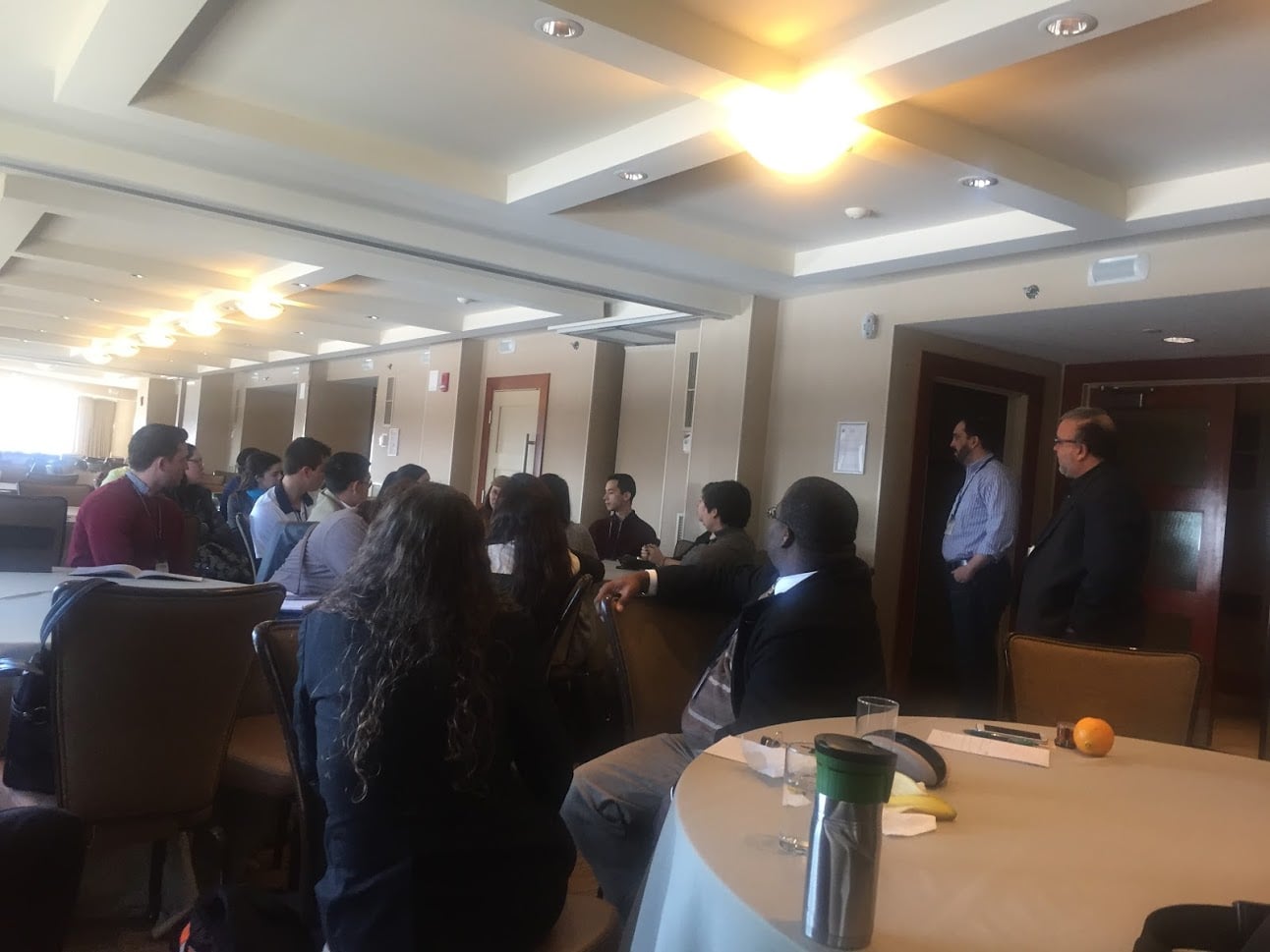 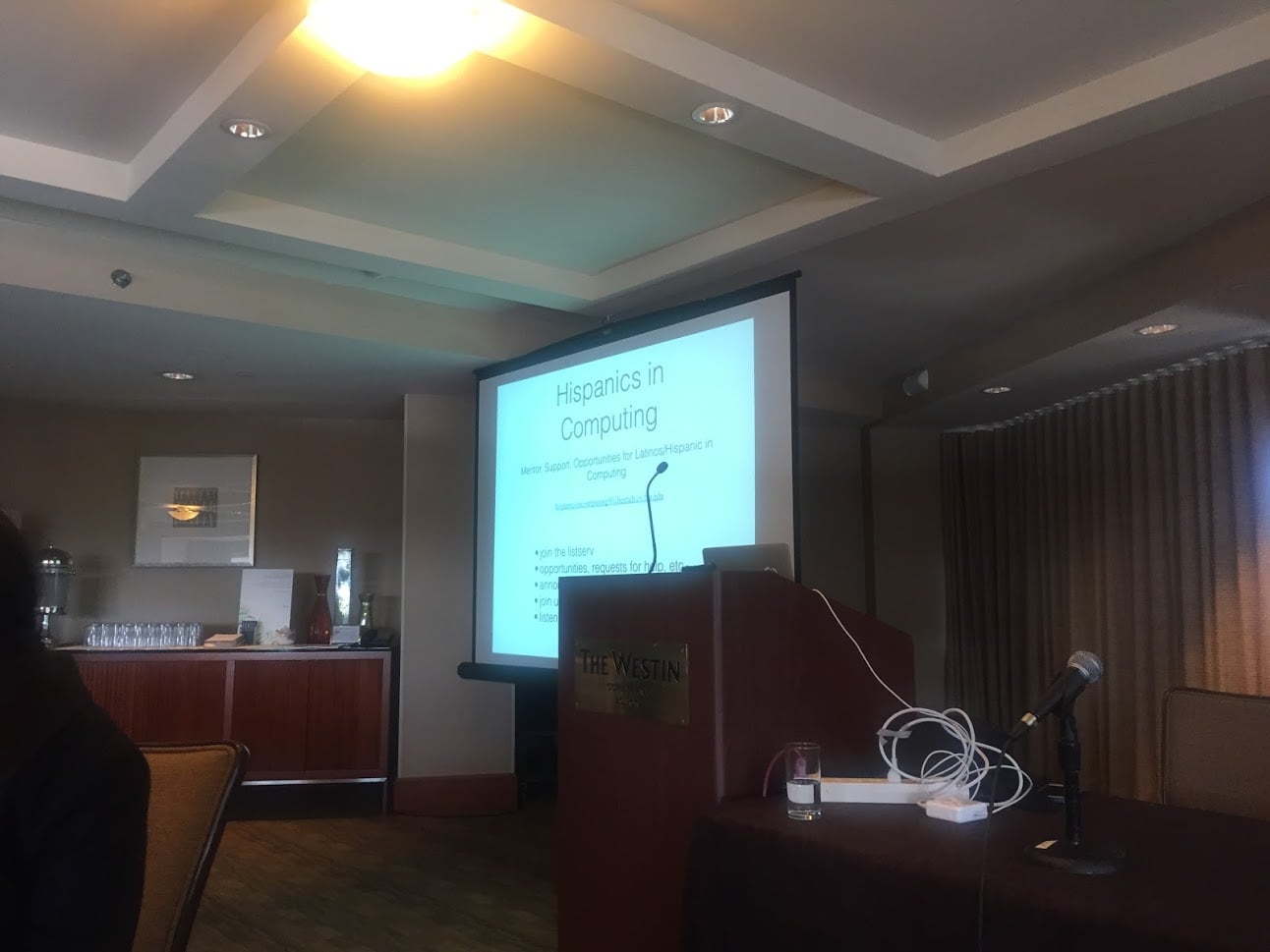 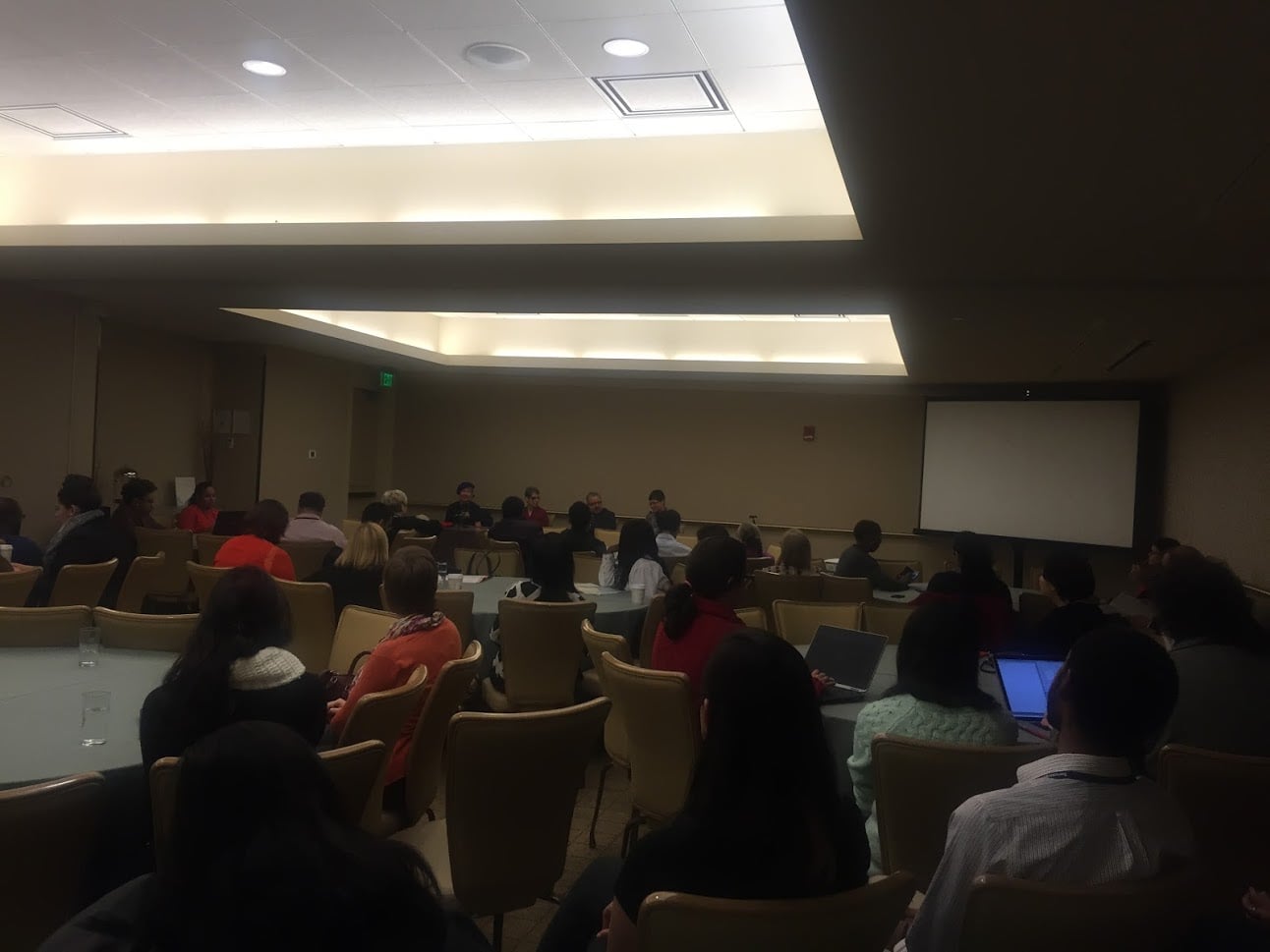